I love to go for long walks in the countryside south of London between the downs and the sea, and I plan them with geology in mind. That region, Surrey, Kent and Sussex, has a simple geological structure. As Darwin knew, the North and South Downs are the remains of a chalk dome 30 miles across, eroded to expose the older rocks of the Weald in between. However, the pattern is not completely regular and there are lots of little puzzles to be explained, by turning to the books and the map of course, but also by seeing for oneself. The rocks narrate exactly one chapter of geological history, the Cretaceous period, and they are of marine sedimentary origin.

The chalk seas covered the whole of southern and eastern England, possibly more, but earlier in the period the Weald cannot have been far from the shore. Walking south from almost any point on the North Downs or the other way round, you tread on the same sequence of rocks in reverse order of age: waterlogged Gault clay, crumbly Greensand and, in the centre, hard Wealden sandstone, the only real climbing rock in the south-east. But at the base of the Chilterns not far to the north you immediately find yourself on older, Jurassic, rocks which must have been dry land in the early Cretaceous, not far from a seashore in the direction of London. The dinosaurs which have been found in the Weald were land creatures which doubtless fell into lagoons or were swept off by shallow seas. Alas, the final page of the chapter is missing for we lack the very highest rocks of the Cretaceous which record the great extinction which carried them away. 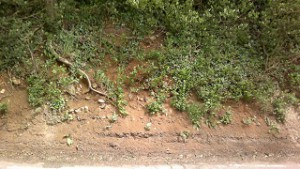 The sea became land once more and the story jumps ahead to the raising and hollowing out of the dome. Millions of years must have passed, but we only have one clue as to how many. It consists of patches of red sand in the hills above the lovely small town of Lenham. Shelly fossils abound in them and even amateurs like myself can see that they are younger than other fossils of the area since they have not really turned into stone. The books say they date from a brief return of the sea in the Miocene period, and since the emergence of the dome warped the sandy beds along with the chalk they sit on, the dome must be later than that. It was therefore nothing to do with the rise of the Alps (too early), and my guess is that it was a distant ripple of the movement which raised the Pyrenees, but a lot happened around that time and nobody really knows.

The dome rose, and then most of it was swept away again. Darwin, supposing that it was rivers and tides which carried off the missing rock, estimated that the process would have taken 306, 662, 400 years. This was the kind of mistake great scientists make. In fact the erosion was due to thawing in the Ice Age and all took place less than a million years ago. The result was the oval escarpment of the Downs and some little problems within the grasp of a weekend amateur to investigate.

On a classroom wall at one of my schools there hung an intriguing geological map called The Paleozoic Floor. It showed the outline of England and Wales blazoned with colours indicating the age of the rocks, but everything later than the Triassic period, including the familiar green stripes of the Cretaceous, was stripped off to reveal what lay below. After vain enquiries at the Natural History Museum I tracked it down on the internet, part of a dated but fascinating monograph by LJ Wills. It amounts to a geological map of Britain at the time of Pangaea and is unexpectedly relevant to the shaping of the Downs. 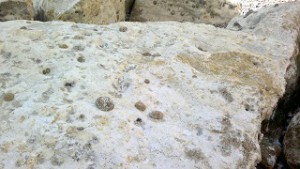 The geological map shows the rocks of the escarpment as ribbons of colour bordering the central oval with plenty of variation – here thick, here thin – from one locality to another. The tightly bunched section in Surrey is the Hog’s Back, where it is well known that the strata are tilted vertically. The explanation is also well known, that the folding reactivated an old fault deeper down and tipped the horizontal layers on their side. This had other consequences. Looking west from Box Hill with its panorama you see Leith Hill, apparently a continuation of the chalk escarpment. In fact Leith Hill consists of greensand, normally found at the level of the river valleys but plainly elevated in the region south of the fault. North of it lie the heaths of Surrey, the Bagshot Sands found at the tops of hills elsewhere in the southeast, but depressed from that level here. Further east, the chalk extends a long way back over the Kent coalfields and also forms a long tongue towards Gravesend and Tilbury at the mouth of the Thames. The Wills map shows Carboniferous rocks near the surface in eastern Kent and an ancient dome under the Thames estuary.

The irregular features of the South Downs are of a completely different kind. Wills does not help us here, for in this region his map is simply blank. When the paleozoic floor was the surface, Britain lay at the heart of the supercontinent, a desert hemmed in by mountains. Like Central Asia and the western USA now, it was a land of plateaus and basins, and a plateau descended steeply into a basin just south of Guildford. Though more is known now, Wills had little idea of what rocks it contained. The South Downs are characterised by sweeping bays in the escarpment, like the valley containing Lewes and the looping shape of the hills north of Brighton. They have the appeareance of erosional features but they have no watercourses at the bottom. The question arises, how did the dome erode?

The sea was much further away at the height of the Ice Ages and only began to return with the formation of the Channel river 40, 000 years ago. Some books give the impression that the Wealden dome was completely intact until that time, which seems implausible, whereas others talk about peneplanation. It is a remarkable fact that the hilltops of southeast England are much the same height, as if they were once at the level of the plain, but a completely flat peneplain is a theoretical construct never seen in nature. I imagine that the Weald 40, 000 years ago was already a ring of hills, further from the sea than now and at a greater height above it. 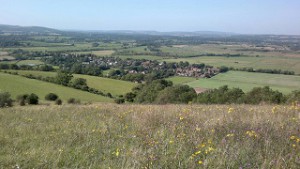 Bays in the South Downs

The basin inside the ring would, I think, have drained through the hills southwards towards the Bay of Biscay, since rivers wearing back would have driven through the narrower South Downs earlier than on the other side. The drainage of the northern Weald looks like an afterthought: only after sea level had risen to its present point could the Medway have broken through the North Downs to capture its current headwaters (the Medway is tidal almost as far as Maidstone and was only confined to a course in historical times, hence the triangular bite taken out of the escarpment in that area).

When the land was higher and the sea further away, the Ouse and the Arun would have been the main rivers of the region, flowing directly south in their present courses and fed by tributaries which followed the east-west grain of the land. It is my personal theory that this is the origin of the bays in the South Downs. The lost watercourses that explain them once flowed east and west six hundred feet up when that was the elevation of the valley floors. With the arrival of the sea, the watercourses vanished but their valleys sank with the rest of the region, the dry shadows of rivers in the sky.