Herne Hill… Luton Airport… Roma Termini. Off to the Villa Mondragone for the Voynich Centenary Conference. Budget airlines, finding a room in a foreign city at night, oh what a hassle, but in the event it is all worthwhile.

First some geological sightseeing around Lake Albano, an extinct volcanic crater. The nature trail round the rim is as green as the Chilterns and the water far below as blue as an iceberg. I never knew Tertiary geology could be this good. 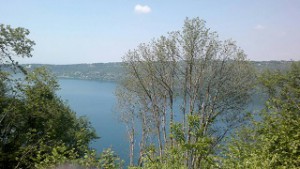 Next day, at the conference itself, some Canadians are making a feature documentary about nerds. Plenty to keep them happy, and plenty for the rest of us too. I told you so: the manuscript is fifteenth century, and Greg Hodgins, who carbon dated it, is there in person to explain his results. In conversation later, he tells me the Vinland Map may well be genuine.

A day of worthwhile presentations, plus the best Voynich crank I ever came across: he gets five minutes to explain that it is really about the sinking of the Titanic. I half expected a contingent of mystery men, but there is only one: a trustafarian looking young man who wears only black and gives his name only as Den. Can he be a spy? Then delicious Frascati wine, a delicious dinner and more obsessive discussion in the morning.

Back via Rome, but there is only time for the obvious sights. Plenty of euros in the Trevi fountain, but nobody fishing them out: no wonder broad money has collapsed. Finally trains, planes and automobiles and home to Herne Hill at midnight.