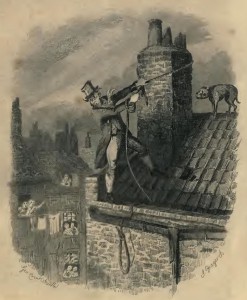 Near to that part of the Thames on which the church at Rotherhithe abuts, where the buildings on the banks are dirtiest and the vessels on the river blackest with the dust of colliers and the smoke of close-built low-roofed houses, there exists the filthiest, the strangest, the most extraordinary of the many localities that are hidden in London, wholly unknown, even by name, to the great mass of its inhabitants.

To reach this place, the visitor has to penetrate through a maze of close, narrow, and muddy streets, thronged by the rougest and poorest of waterside people, and devoted to the traffic they may be supposed to occasion. The cheapest and least delicate provisions are heaped in the shops; the coarsest and commonest articles of wearing apparel dangle at the salesman’s door, and stream from the house-parapet and windows. Jostling with unemployed labourers of the lowest class, ballast-heavers, coal-whippers, brazen women, ragged children, and the raff and refuse of the river, he makes his way with difficulty along, assailed by offensive sights and smells from the narrow alleys which branch off on the right and left, and deafened by the clash of ponderous waggons that bear great piles of merchandise from the stacks of warehouses that rise from every corner. Arriving, at length, in streets remoter and less-frequented than those through which he has passed, he walks beneath tottering house-fronts projecting over the pavement, dismantled walls that seem to totter as he passes, chimneys half crushed half hesitating to fall, windows guarded by rusty iron bars that time and dirt have almost eaten away, every imaginable sign of desolation and neglect.

In such a neighborhood, beyond Dockhead in the Borough of Southwark, stands Jacob’s Island, surrounded by a muddy ditch, six or eight feet deep and fifteen or twenty wide when the tide is in, once called Mill Pond, but known in the days of this story as Folly Ditch. It is a creek or inlet from the Thames, and can always be filled at high water by opening the sluices at the Lead Mills from which it took its old name. At such times, a stranger, looking from one of the wooden bridges thrown across it at Mill Lane, will see the inhabitants of the houses on either side lowering from their back doors and windows, buckets, pails, domestic utensils of all kinds, in which to haul the water up; and when his eye is turned from these operations to the houses themselves, his utmost astonishment will be excited by the scene before him. Crazy wooden galleries common to the backs of half a dozen houses, with holes from which to look upon the slime beneath; windows, broken and patched, with poles thrust out, on which to dry the linen that is never there; rooms so small, so filthy, so confined, that the air would seem too tainted even for the dirt and squalor which they shelter; wooden chambers thrusting themselves out above the mud, and threatening to fall into it–as some have done; dirt-besmeared walls and decaying foundations; every repulsive lineament of poverty, every loathsome indication of filth, rot, and garbage; all these ornament the banks of Folly Ditch.

In Jacob’s Island, the warehouses are roofless and empty; the walls are crumbling down; the windows are windows no more; the doors are falling into the streets; the chimneys are blackened, but they yield no smoke. Thirty or forty years ago, before losses and chancery suits came upon it, it was a thriving place; but now it is a desolate island indeed. The houses have no owners; they are broken open, and entered upon by those who have the courage; and there they live, and there they die. They must have powerful motives for a secret residence, or be reduced to a destitute condition indeed, who seek a refuge in Jacob’s Island.