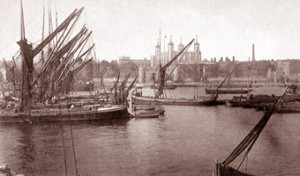 Some people’s ancestors were rich and famous. Mine were interestingly poor. My great grandfather Neal came from the dockland area of Bermondsey called Jacob’s Island, a notorious slum which attracted the eye of social reformers including Henry Mayhew and Charles Dickens. (The tenements are long gone now and the Victorian warehouses have been converted into high tech offices and expensive studio flats.) It is the setting for part of Oliver Twist and I like to say that my family lived next door to Bill Sikes. The truth is that they lived next door to the house of Bill Sikes, a prominent landmark which was pointed out in Dickens’s day as the building from which Bill falls to his death in the novel. I have collected some contemporary descriptions of the place.

A Visit to the Cholera Districts of Bermondsey